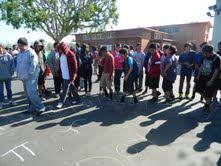 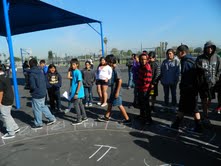 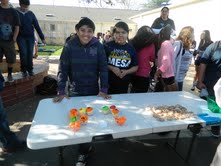 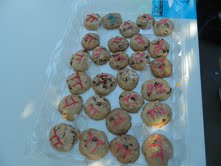 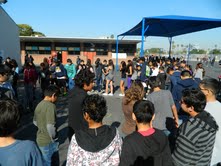 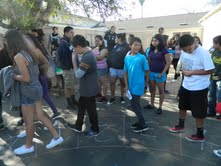 Pi Day is celebrated on March 14th by math scholars. Pi is a symbol that represents the ratio of the circumference of a circle to its diameter, with the symbol being a Greek letter. Pi = 3.1415926535….
MESA students planned a fun “Pi Walk” activity that took place during nutrition. If a student’s number was called, he or she could pick a cookie or cupcake as a prize that had the Pi symbol on it.
A Special Thanks To:
*Our math/science teachers, who serve as the MESA advisors, for making this event possible. Mrs.    Michelle Sanchez and Mrs. Jacqueline Ramirez, you make a difference.
*MESA students who planned the event, made posters, and provided set up and clean up.
*Mr. Oscar Sanchez, custodian, for assisting with set up.
*Mr. Jauregui, for being an awesome MC.
*MESA Students/Parents for donating yummy treats.